I regularly find myself close to shutting down my Facebook account, and abandoning my timeline forever…but then I’ll come across a project like Bròn, and decide against it, thinking ‘what if I miss out on learning about other great bands?’ I’m often scatterbrained when on Facebook, and my attention is spread far too thinly. But I made the decision I was going to stop jumping from thing to thing, and encounter the release towards which I’d been given a gentle shove. I wasn’t even halfway through Bròn’s demo Fògradh when I made the decision that I had to find out more about the band, the inspiration for the music and the person behind it all. 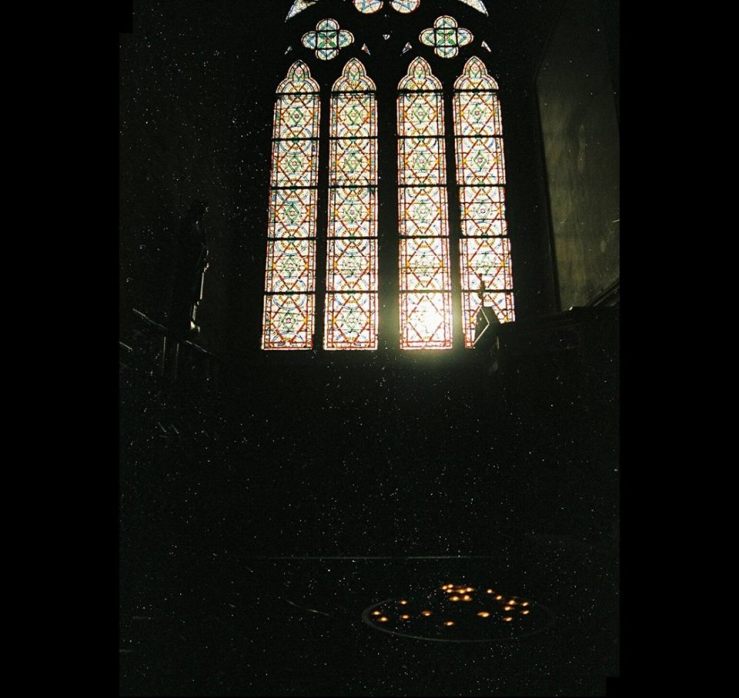 Are you able to recall when you decided to establish Bròn, and what inspired the creation of the project? What did you initially want to accomplish, and would you say that your ambitions concerning the band have changed since the release of your debut demo Fògradh?

The exact moment was when I was walking home one night after a rehearsal for another band at the tail end of winter. I had a vague melody in my head (for the first BM section of Fògradh) and an indefinable kind of feeling I wanted to capture. I had previously wanted to do something more synth-oriented, and the ideas and vibes I had called for the heavy use of synths. My only aim at that point was to capture those emotions and atmospheres and to become a bit more proficient with keys. At that point I had no clear idea of what I was creating, or trying to create, and it kind of just spiralled from there. My ambitions behind the project haven’t changed at all since those initial stirrings.

For how long was the demo in production, and are you able to unveil some details about the production process? Was it thoroughly enjoyable, or did you rank up multiple migraines along the way?

It’s hard to say how long it took as the recording of different instruments was quite fragmented. Perhaps somewhere around three months. It was simultaneously enjoyable and an absolute nightmare. The composition process was kind of section by section, beginning with the basic guitar parts as the foundation, and building the synths on top of that. I hadn’t really played keys before, apart from some very basic embellishments in Belliciste, so I had to learn the instrument as I composed. That was the main cause of headaches during the production process, and many nights were spent locked in my room attempting the same sections over and over. I became quite obsessive about it. At the same time, that aspect was what was enjoyable. Because I had no knowledge of how to achieve what I wanted, I had to do everything by feel. That reignited the feeling I had when I first started to write Black Metal music. The drums are programmed, which is a terribly tedious task but the guitars, bass and vocals came much more easily as I’m already comfortable with those things.

In my research, I discovered the name Bròn has Scottish/Gaelic origins, but would you be able to explain the meaning behind the word, and why you thought it was a suitable fit for this project?

Bròn translates to something like grief or mourning, and that just suits the overall atmosphere of the band for me. It was sparked by a yearning and sense of loss of something indefinable and intangible, so the name just seemed right.

What does the word Fògradh mean, and why was it the perfect title choice for the demo?

Fògradh translates to exile or banishment. During the recording process, I received notification that my UK visa had been curtailed and I would have to leave the country, so that sparked the idea for the name, although the lyrics don’t touch on that at all. The name connects to the lyrical themes in a similar way to what Bròn does. A banishment from an unknown place or time and a divorce from something intrinsic but inexpressible. It’s a bit of a challenge to describe thoroughly, as the idea behind the project was to express emotions that are difficult to define or express otherwise.

There’s a deep, lasting melancholy throughout Fògradh, but also a variety in the sound and delivery that’s utterly astounding, and at times, brings to mind Lustre and Burzum. At moments, the listener is immersed in stunning, ethereal sounds, yet these are followed by passages that are almost epic in their solidarity and powerful atmosphere. Did you have a set sound, or variety of sounds in your head when you first started to develop the demo, or was it more on the spot inspiration?

It was definitely an on-the-spot thing. I had an idea for the first riff and accompanying key parts, but otherwise I had no clear intentions of what I was creating until the piece was finished. It just developed naturally, bit by bit, until I felt like it was fully complete and had captured the atmosphere I had in my head.

The accompanying artwork for Fògradh features a particularly beautiful stained glass window. Where did this image come from, and why was it the chosen image for the release?

That photograph was taken by a very good friend of mine. We were flicking through photos he’d taken one night and it caught my attention. I loved the effect the graininess of the old film captured. It gives it an ethereal, cosmic look, which in combination with the stained glass and candles gives me the same kind of feel as the music.

I have listened to Fògradh several times now, and have resisted the urge to multitask while listening. It has been quite some time since a release has been able to have that kind of power over me. What state of mind were you in during the creation, and where was the music written and practised? Did you prefer solitude when putting the demo together?

During the composition process (which also included the recording of the synthesizers), I was obsessive. I was shut in my flat for hours on end, experimenting with synths by candlelight and obsessing over every small detail. Guitars and vocals were recorded at the home of a close friend, but he kind of just left me to it after equipment had been set up. Solitude was very important during the whole process. I was attempting to express atmospheres I couldn’t express verbally, so having other people involved or any outside influences would have been detrimental to those atmospheres, and I don’t think I could have adequately conveyed what I was attempting.

Aside from Bròn, what other project take up your time, and are your other projects also rooted in black metal?

Yeah, at this stage all of my projects are based in black metal. Barshasketh is my main musical output, and we have a split with Krawwl due in October and another split recorded and in the pipelines. We’re also beginning to record our next full length in a few days. I also create raw, filthy black metal under the name Belliciste. The debut album ‘Sceadugenga’ is going to be released later this year via Todestrieb Records.

Are you satisfied with the feedback you’ve received for Fògradh, and what are your thoughts on the importance of constructive criticism?

I’ve been surprised by the positivity of the reactions to the demo, but it’s not really something that interests me at all. Constructive criticisms or outside opinions, while appreciated, are irrelevant to me. I had an idea and emotion I wanted to express, I obsessed over the details of the composition and I captured the atmosphere I wanted, so anything external doesn’t come into it. I’m a harsh critic of my own work, so I’ve identified which aspects need further work on the next release.

You’re originally from New Zealand but have been living in Scotland for a while now. What drew you to Scotland, and how have you coped with the cultural changes? Do you enjoy escaping into the rugged, Scottish landscapes?

I wanted to be in Europe, and the UK was the easiest option for that visa-wise. I had no desire to live in London, as most New Zealander’s who move to Britain do, and I had contacts in Edinburgh who I could stay with upon arrival, so it was the logical choice. My surname is comprised of two hyphenated Scottish surnames and is almost hyperbolic in its Scottishness, so it was also nice to spend time in the country I’m partly descended from. There aren’t a lot of cultural differences between New Zealand and Scotland, and the ones I noticed were very superficial, so there wasn’t a lot of adjustment needed. I’m currently living in Serbia, and there’s slightly more adjustment required in that regard. I didn’t make the most of my opportunity to escape into the wilderness while I was in Scotland, but when I did I absolutely loved it. The bleak, mournful and solitary landscapes are still among my favourite on earth.

Has work begun on the second release? Is there anything that you’re willing to reveal about it?

I have begun to compose a few riffs, but it is very, very early stages. It’ll be some time before I’m permanently settled and in a position to record, so there’s not much to reveal at this stage!