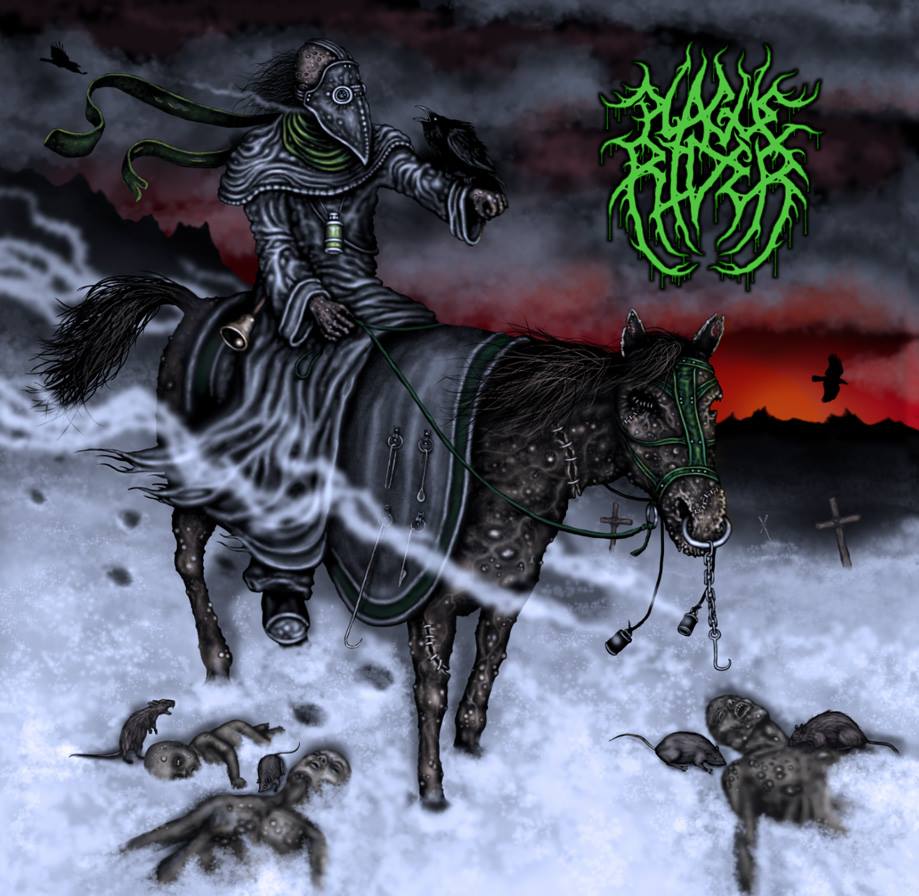 I was pretty fucking chuffed when I was handed Plague Rider’s debut album at Byker Grave Festival. One of my main objectives as a writer is to shout out about bands that deserve to be heard. And shout out fucking loudly. Plague Rider are a technical death metal band with thrash influences, and they hail from the UK’s metal capital Newcastle-Upon-Tyne.

The album kicks off with Shape Shifting Monstrosity. The intensity is immediate, and I feel as if I’m being slammed repeatedly against a cold, steel wall. It’s fast, it’s furious, it’s hugely fucking accomplished. Distorted guitar riffs are layered with clean, sharp, technical sequences. There’s a start, stop, start rhythm at times, making for an unpredictable listen. It’s an exhilarating start to the album.

Track two Plague Rider smashes in with unprecedented fury. It’s fast as hell and sends my head spinning off its bone axis. The diversity I’ve experienced already is astonishing. It’s an ambitious track, with multiple, textured layers to it. This is unforgiving music. Plague Rider have no limitations, and are in constant experimental motion. This music sounds fresh, it sounds original. It’s compelling and pulsing with energy.

Malign Air has a slightly different feel, but the technicality and texture is still present. The vocals sound as if they’re getting progressively heavier and darker. It’s a brutal track with a sinister feel. I’ve yet to experience a dull moment. They really utilise every second. At the midway point, the vocals unhinge something in me. They’re powerful and utterly inescapable.

Subconscious Entrapment has a slightly less accomplished feel than the previous tracks, but it does, in time, pick up, and my curiosity as to which direction they’re going to take things is maintained.

Black infused vocals bring in Life Tribulation. It’s an intense, dominant track, which takes my expectations and smashes them to bits. The passion in this track is fucking red-hot. It’s dark, vicious and utterly compelling. I ought to mention that this is a young band, with the majority of the members in their early twenties. Though in my opinion, Plague Rider sound like a band with a lengthy history and decades of experience. The tempo chops and changes, making for a varied, hugely fulfilling listen. There’s a dynamic force to this entire track, from start to finish.

I feel as if I’m in the midst of a hurricane when Universal Suffocation begins. The vocals are dominant and I feel as if I’m having the breath squeezed out of me. There’s such a lot going on that this track requires multiple listens. This band really is an uncompromising metal machine.

Genetic Devolution is fast from the onset, and it makes me feels as if I’m trapped and running in circles. It’s driven and features some of the finest guitar work from the whole album.

The final track Neoplasm is a surreal experience.  It’s atmospheric, dark and tense, and makes for an absorbing end to the album.

Plague Rider have crafted one hell of a debut. You can smell the sweat and taste the blood that’s been put into this. Buy and support.