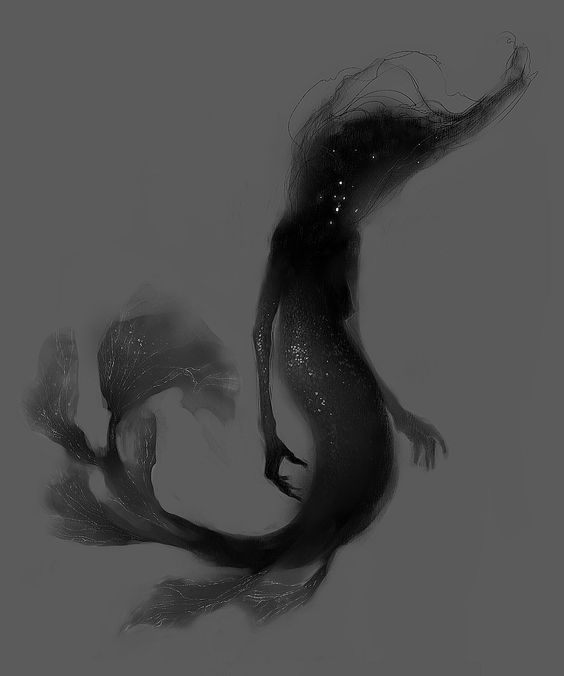 I got to thinking about mermaids the other day when I was reading into sea glass – something for which I’ve developed quite the obsession – and I discovered that, in sailors folklore, sea glass is said to be mermaid’s tears.

The tears are supposedly shed as a result of Neptune’s jealous wrath when a mermaid falls in love with a sailor, or when a sailor dies.

On a side note, for those of you who’re interested, sea glass can take between 20 and 50 years to be tumbled and weathered from a sharp shard into the smooth-edged treasures we find on our shorelines.

Now, I’d be lying if I said I didn’t enjoy Disney’s The Little Mermaid when I was a youngster, but rather than fawning over Ariel, I found myself drawn to the sea witch Ursula. I was mesmerized by her inky octopus tentacles and lavender skin. Her garden of writhing polyps who were, once upon a time, merfolk, disturbed me considerably.

However, when I found out what happened in Hans Christian Anderson’s story, I felt cheated. I yearned for that version to be made in all it’s horrific glory. In the original story of The Little Mermaid there isn’t a Happy Ever After ending. In the original story, she dissolves into sea foam, after refusing to kill the prince when he marries another woman.

In Slavic mythology, the Rusalka is a restless spirit of the unclean dead, aka a ghost of a young women who died a violent death. Rather than living in the sea, they can be found haunting lakes and rivers. After dark, they emerge from their watery realms to dance under the moon and lure men down to the water to drown them.

The Japanese have the myth of Nure-Onna, a creature with the face and hair of a woman, but the eyes, tongue and teeth of a snake. She sits by the water’s edge and cradles a bundle to trick people into thinking she’s a distressed mother holding onto her baby. If someone handles the bundle it becomes so heavy they’re pinned down to the rocks. The Nure-Onna then uses her snake tongue to drain their blood. Some tales say she strangles her victims with her hair. I’m particularly fond of that imagery.

In Scottish folklore, there are tales of The Blue Men of Minch, a group of creatures that inhabit The Minch, a strait in North-West Scotland. Legend says that they appear in groups, rising out of the water with only their torsos exposed. They wave to sailors who assume they’re folk in need of rescue. However, once the sailors get close, they see the unnatural blue tone of their skin and their twisted features. But by then it’s too late and they’re dragged under by the Blue Men who make quick work of their flesh.

I thought I’d round up by telling you about something that happened in the southern English waters near Exeter. It was November 10th, 1737, and at a fishing ground called Topsham Bar, eight fishermen who’d been out at sea all morning hauled their nets onboard and were “startled to discover a creature of a human shape, having two legs.”

Each fisherman was interviewed independently, and what each one of them said about the creature was that whatever it was “leaped out of the net and ran away.”They caught up to it and found it dying, “groaning like a human.” One of the fishermen reported, “Its feet were webbed like a duck’s, and it had eyes, nose, and mouth resembling those of a man.” He added it had a “tail like a salmon and it was around four feet high.” The event is said to have haunted the men for as long as they lived.

Here is the art I’ve gathered over the past few days. Like always, if you know who the ‘Unknown’ is, please do shout!

2 thoughts on “Dark Art Of Mermaids & Other Sea Folk”