It will come as no surprise to readers of Wyrd Words & Effigies that I am infatuated with Nordic folklore. It was this infatuation with ‘the others’ that reside in the forests and mountains, rivers and fjords of the Northlands which which led me to the work of Norwegian photographer Ole Marius Joergensen, and his spellbinding series The Way North.

In the following interview, we cover a lot of ground, including the origins of his career as a photographer, the predominant role nature plays within his work and why he doesn’t take photographs in his spare time. 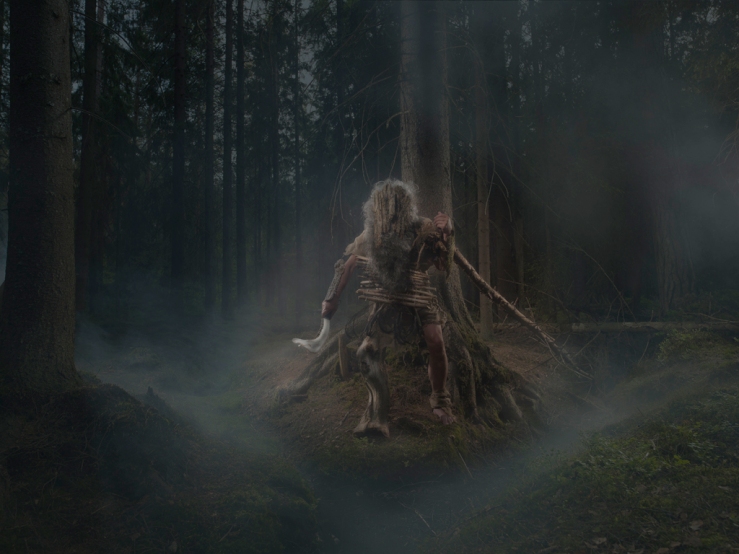 When did you first realize photography was the artistic medium you wanted to dedicate yourself to, and what prompted your decision to pick up the camera?

It started with a photo-book I discovered while visiting San Francisco in 1989. Its name was «The red couch». It’s about a red couch traveling through USA. I never forgot those images. That book was the creative seed which would result in me becoming a fine art photographer. It had  mix of beauty, absurdity and humor. The funny thing is that I finally bought the book in 2003.

I started with film studies but film wasn’t the right medium for me. So the natural next step for was photography.

Nature plays a prominent role in your work, especially the nature of Norway’s more northerly regions. Could you please talk about the relationship you have with the nature of your country, and what it is about the landscapes that moves you to action?

My family has always been very found of nature and being in it. Our cabin is close to a beautiful mountain region where I have spend a lot of time. Being from a country with so much nature it was natural for me to use it in my images. You use what’s around you. If I was from a big city I would probably have more big city in my images.

The series I’m especially preoccupied with at the moment is your Norwegian Folklore series The Way North. What inspired you to start this project, and can you talk about the process you went through to create it?

A few years back I wanted to look into the Norwegian culture and more precisely the folklore. I felt my expression and influences were all about the US. I wanted to discover my roots. So I went to my childhood. As a child I was told the old stories about trolls and other creatures which you could meet while being in the Norwegian wilderness. I remember loving those stories deeply. Maybe it was those bedtime stories which got me interested in story telling/creating?

I find a lot of inspiration from paintings from the late 1800’s. They used nature in a very mysterious and magical way. I wanted to use those elements for my series. I also needed a designer who could do the creatures and their clothing since I knew nothing about design and thought it would enrich the project to bring in a designer.

For The Way North you collaborated with Mikkel Brand to create the costumes we see in the photographs. What was your experience of this collaborative effort, and what value do you place on teamwork when it comes to your photography?

Mikkel Brand Bugge is a fantastic person and designer. He did costumes for the Norwegian electronica duo Royksopp which was how I found him. I asked if he would collaborate with me on this folklore project. Luckily he loved it. He got 100% freedom for the costumes/creatures and I focused on the images. Physics played a key role. The project demanded a lot of carrying of equipment and climbing. Bad weather, cold – warm etc. All the images were taken on location. We both were in good shapes and no strangers for walking in steep terrain.

It was a great process to learn how other think and sees things. Mikkel will go far, I have a good feeling for him and we both have deep feelings for ginger ale. 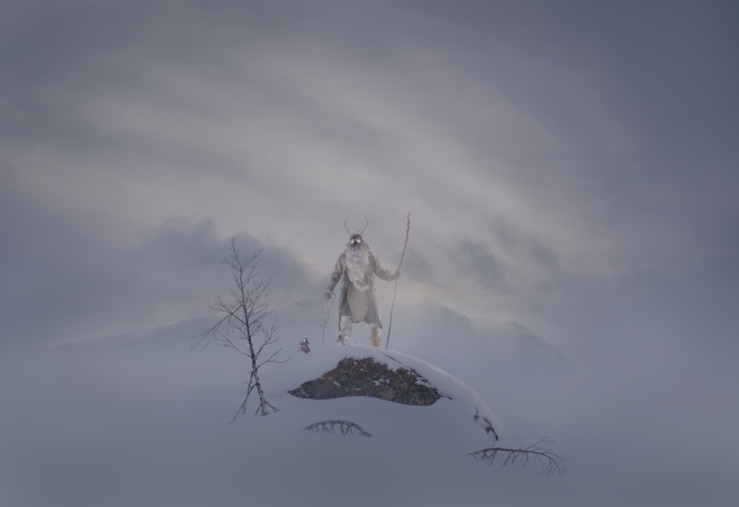 There’s several different folkloric creatures within The Way North series, though I’m eager to know which creature you personally find the most fascinating?

My favourite creature must be the Nix. I remember from my childhood and being in the forest thinking of his head entering the surface of the lake. What a thrill it gave to my moments in the local forest. Our image is based on a very famous painting made by Theodor Kittelsen.

My favourite image in the series is Dance of the Elves. Would you be able to talk a little about the creation of this piece?

It’s all about a old oak and a fog machine. At night elves would dance (in circles) in the grass. The day after one could see rings in the grass. I like the idea that they were dancing around the oak tree. If one would see them dance it could look like fog rings…so why not a ring around the tree. 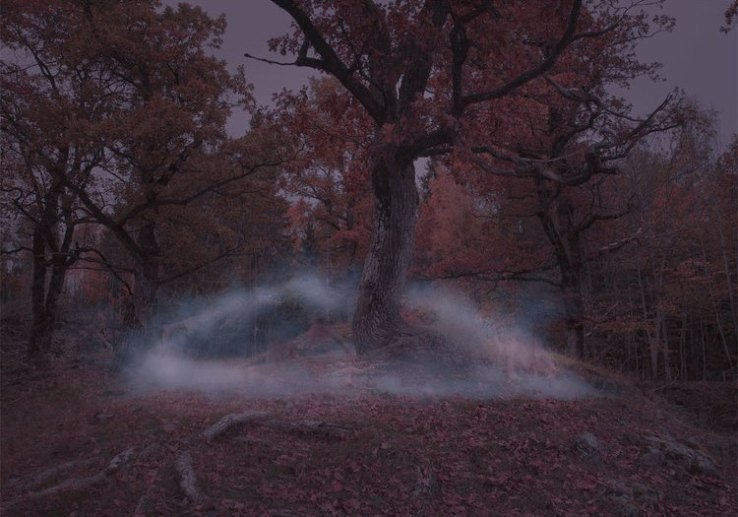 Dance Of The Elves – The Way North Series

You shoot your photographs predominantly in sparsely populated areas. What would you consider to be your most physically and mentally challenging experience to date?

The worst experience was the Nix making. It was shot in a small lake 30 min walking into the woods. I had spotted this lake from a airplane. This summer was a fantastic mosquito year. I have never experienced this magnitude of mosquitoes. When we came out of the car we had to cover our entire bodies and couldn’t stand still. This resulted in me forgetting the camera, so when on location I had to run back for it (30 min) I was very stressed because we where shooting in the blue hour. So we got delayed a bit. It was very swampy around the lake, so long exposure was impossible due to the rocky foundation. Everything got wet, it was very warm and constant devils in the air. We had to set the light without losing it into the lake and the fog machine had to do its job which isn’t always the case. I think i got a great deal of grey hear that evening. The lucky one was the model who was laying in the lake for an hour.

Trondheim was home and your place of study for two years. How did your time here influence the direction you would go on to take with your work?

Trondheim is a magical city. I learned almost everything about photography there. The city is great located between mountains, fjords and forests. It would open my eyes to what great scenery we have. I also learned a great deal from my fellow students. Without them I wouldn’t be what I am today.

Would you mind providing an insight into the intriguing love/hate relationship that you have with light?

I love sunrise and sunsets. It gives such a quality to the images. Living in Norway it can be a very frustrating thing to hocked on. For almost every out-door shoot I have to plan for 3 days shooting due to waiting for the right weather. I like the challenge which occurs when shooting outside. The exterior light vs natural light, the model, props, fog machine, the right location and the timing.

You’ve mentioned in other interviews that you don’t do much photography in your spare time. Do you find photography doesn’t have the same ‘magic’ when you’re going about your daily life?

I dislike when people are all about capturing incidents on cameras instead of being present. I was at a wedding one time, when it was kiss-the-bride time everybody was on their cellphone. No one was mentally present. I see this more and more and I don`t want to be part of it. I do take some family photos or things I experience but I don`t spend a lot of time on it.

You’re fascinated by stories, and favour tales with a dark edge. I’ve read that you have a particular liking for Stephen King. What, in your opinion, does King do that makes his creations so special, and what are your favourite works from him?

He takes everyday life and makes it special/creepy/dark/twisted. Different artists make different worlds. His worlds are just perfect for me. I love that he uses what’s around him. the story very often take place in small town, Maine where he lives. There`s very often an element of supernatural present. I love his humor and his language. His best books are Hearts in Atlantis, From a Buick 8 and 22.11.63.

I discovered that you’re enthusiastic about doing a project exploring our destructive attitude towards Mother Earth. What’s the story behind the need to create this project, and have the wheels been set in motion for it?

The need for doing it comes from looking out of the window. We are driving this planet straight to …in full speed. I want to make something special, but haven’t got the right idea yet. I hope it’s coming. I don`t want to make a project showing burned forests, plastic everywhere, etc…it needs something extra to it. I really love the series «Inherit the Dust» by Nick Brandt. It really makes you think. Which a project about Mother earth needs to be about.

The Old House – Vignettes Of A Salesman Series

What are you currently working on, and what are the plans for the remainder of 2016?

At the moment I am finishing my series «Icy blonds» which is about Hitchcock`s famous female characters. Hitchcock is a very important element in my creative foundation. His work is visible in many important artists which again has influenced my visual language.

I am also working(sketching) a project about our way of living. Many lose ends yet… 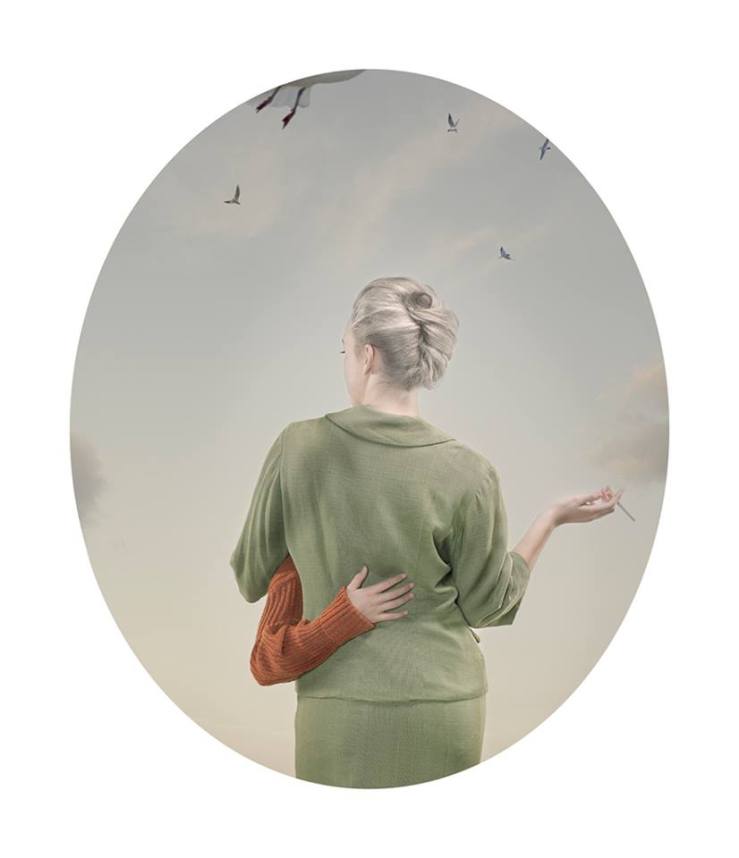 Work from an upcoming project